June 21, 2017 — Eureka! I wanted to announce something small, but slightly novel, and potentially useful.

What did I discover? That there might be useful general purpose programming languages that don't use any visible syntax characters at all.

I call the whitespace-based notation Tree Notation and languages built on top of it Tree Languages.

This language has no parentheses, quotation marks, colons, and so forth. Types, primitives, control flow--all of that stuff can be determined by words and contexts instead of introducing additional syntax rules. If you are a Lisper, think of this "novel" idea as just "lisp without parentheses." 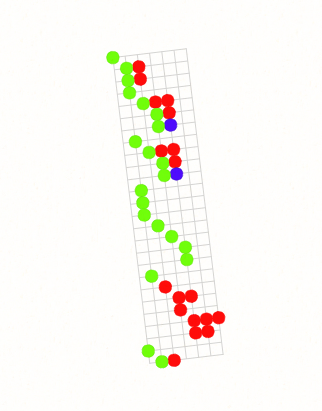 There are hundreds of very active programming languages, and they all have different syntax as well as different semantics.

I think there will always be a need for new semantic ideas. The world's knowledge domains are enormously complex (read: billions/trillions of concepts, if not more), machines are complex (billions of pieces), and both will always continue to get more complex.

But I wonder if we always need a new syntax for each new general purpose programming language. I wonder if we could unlock potentially very different editing environments and experiences with a simple geometric syntax, and if by making the syntax simpler folks could build better semantic tooling.

Maybe there's nothing useful here. Perhaps it is best to have syntax characters and a unique syntax for each general purpose programming language. Tree Notation might be a bad idea or only useful for very small domains. But I think it's a long-shot idea worth exploring.

Thousands of language designers focus on the semantics and choose the syntax to best fit those semantics (or a syntax that doesn't deviate too much from a mainstream language). I've taken the opposite approach--on purpose--with the hopes of finding something overlooked but important. I've stuck to a simple syntax and tried to implement all semantic ideas without adding syntax.

Initially I just looked at Tree Notation as an alternative to declarative format languages like JSON and XML, but then in a minor "Eureka!" moment, realized it might work well as a syntax for general purpose Turing complete languages across all paradigms like functional, object-oriented, logic, dataflow, et cetera.

Someday I hope to have data definitively showing that Tree Notation is useful, or alternatively, to explain why it is suboptimal and why we need more complex syntax.

I always wanted to try my hand at writing an academic paper. So I put the announcement in a 2-page paper on GitHub and arxiv. The paper is titled Tree Notation: an antifragile program notation. I've since been informed that I should stick to writing blog posts and code and not academic papers, which is probably good advice :).

Two updates on 12/30/2017. After I wrote this I was informed that one other person from the Scheme world created a very similar notation years ago. Very little was written in it, which I guess is evidence that the notation itself isn't that useful, or perhaps that there is still something missing before it catches on. The second note is I updated the wording of this post as the original was a bit rushed.